Learn about when 2381 was founded and about our participation in the VEX Robotics Competitions. 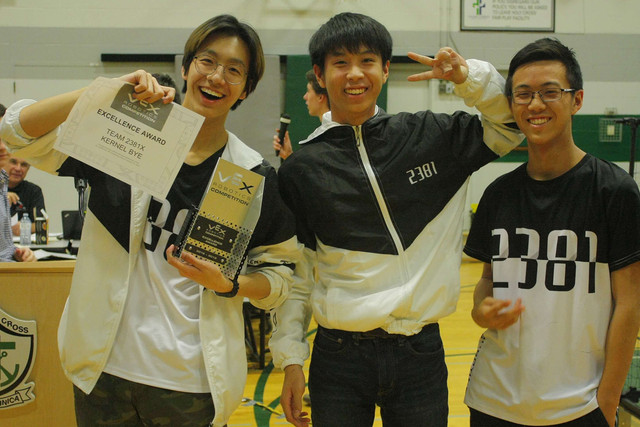 How did it all start?

The Colonel By Robotics club itself has been around for a very long time, however, we only recently started competing in VEX competitions beginning with the 2017-18 season. Our executive team has been working tirelessly in order to organize all the events and incorporate the VEX experience into the club. It currently is the main focus of the club’s activities. 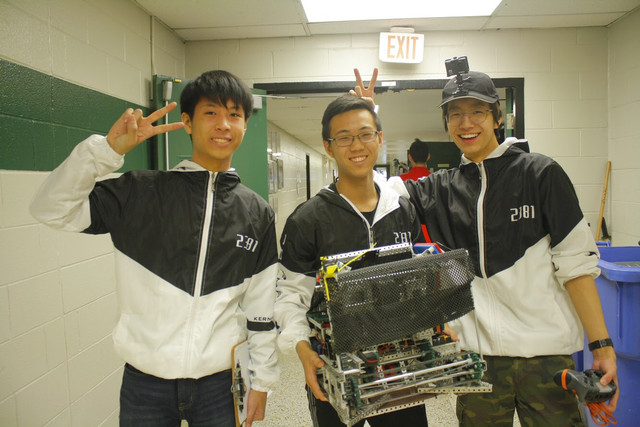 Among the 6 teams, 2381C, 2381W, 2381Y, and 2381Z qualified for the Ontario Provincial Championship held in St. Catharines. On that day, 2381 showed themselves to be considered amongst some of the best teams in Ontario, with their hard-work, dedication and preparation being evident throughout the competition. In the round-robin portion, Colonel By teams went a combined record of 19-9, with 3 teams being selected to compete in the elimination bracket. Team Z, the team who unfortunately missed the elimination round, faced a very difficult schedule and encountered an unexpected hardware failure, leading to them just missing being selected for the elimination round. Teams Y and C partnered to form an alliance, won their first playoff round and came within 6 points of winning their quarterfinal match, a win that would have qualified them for the World Championship.

Team W partnered with a team from Niagara Falls, and lost in the first round to last year's tournament finalist. But with a strong performance in the skills portion of the competition, a performance that placed them 38th in the world, Team W was able to qualify for the World Championship. This season would not have been possible without the hard work and commitment of Mr. Hudson, our teacher supervisor, and the countless hours each team have poured into their robots. A summary of our teams is provided below:

2381D: A freshman team composed entirely of new members to the 2381 robotics family! They’ve attended both competitions held in Ottawa, and have made it to eliminations during the Second Lockheed Martin VRC competition!

2381W: A team composed of the remnants of 2381X, and new members to 2381 robotics. 2381W quickly proved themselves to be a formidable skills team, winning 1x Robot Skills Champion at Terrebonne VRC competition, and qualifying for the world championship with a combined skills score of 133!

2381Y: A second year team continuing their debut in Turning Point. Despite having an unsuccessful early season at qualifying tournaments, they managed to persevere, and claim a spot for the world championship with a skills score of 85 at provincials!

2381Z: Despite being a freshman team, 2381Z was able to learn and adapt quickly to the VEX robotics competition, winning 1x Innovate Award, 1x Build Award, and 1x Design Award this season. Fun fact: in January, 2381Z attended the Wave at WPI signature event held in Massachusetts as the only Canadian team attending!

Turning Point marked the second year of 2381 Kernel Bye partaking in the VEX EDR robotics. This year, we had 3 teams compete in tournaments from Ottawa to Niagara falls: 2381C, 2381X, and 2381Y.

2381C: Team 2381C was the only team in 2381 to run the new V5 system for the entire competition season, and used this to their advantage in building an off-meta defensive robot, combined with a 2-bar lift to quickly score caps on low poles. They managed to win 1x Tournament Champion, 1x Innovate Award, and 1x Service Award, ending their season by ranking 28th in qualifications at provincials.

2381X: This team of 4 quickly showed themselves to be a formidable in Turning Point, picking up 3x Excellence Awards, 3x Tournament Champions, 1x Robot Skills Champion, 1x Build Award, and 1x Think Award, making it to Round of 16 at the VEX Ontario Provincial Championship.

2381Y: Despite being a freshman team, they quickly demonstrated their capabilities in the robot skills challenge, being crowned Robot Skills Champion at the Lockheed Martin Ontario Second VEX EDR Qualifier, qualifying for provincials.

In The Zone marked the debut of the 2381 organization, Kernel Bye, with the founding of team 2381C. Despite this being our school’s first year participating in the VEX Robotics Competition, 2381C managed to pick up the Innovate Award in Toronto!

About Us
Teams
Sponsors